Some of the most dangerous water contaminants have no taste, smell or appearance. Others are more obvious, rendering your water unpleasant to drink, or use for cooking and bathing. Learn more about common water contaminants and contact your local Culligan Man for testing and water treatment options.

Arsenic enters the water supply through its natural presence in bedrock, or as an industrial byproduct. The most concerning health risk posed by arsenic is low-level, long-term exposure via drinking water, and as a result, the possibility of increased occurrences of cancer and other health problems.

The taste and smell of chlorine are unappealing and can also dry out your skin and hair. While municipalities use chlorine to disinfect the water supply, it should be filtered out before you use it to eliminate harmful/annoying effects.

Raw water comes into your home with any number of impurities that can cause turbidity. Tiny particles of clay can hang in suspension, giving the water an unpleasing cloudy appearance or cause your water to have a milky color.

Lead seeps into the water supply from the lead pipes, solder and fixtures used extensively across the United States. There is no safe level of lead exposure, especially for children, who can suffer harmful and potentially chronic effects ranging from stomach pain to brain damage.

Magnesium is a mineral that enters water when rain soaks into the ground, running through sand, soil, and rock. The presence of magnesium creates hard water. Although this is not a direct health hazard, magnesium in water can cause buildup in pipes, shortened life spans for your appliances, increased soap and detergent use, dry skin, dull hair, and spotted dishes.

Nitrates are essential for food, flowers and greener lawns, which makes them a major ingredient in most fertilizers. Although nitrates are naturally occurring in soil, overuse of fertilizer is the largest cause of contamination. Nitrates spread on lawns and fields can move quickly through soil and grow more concentrated in groundwater, creating potential health risks for everyone, especially infants and pregnant women.

PFOA and PFOS are artificial chemicals that were widely used in the manufacturing of industrial and consumer products until the year 2000. Prior to phasing them out of production, PFOA and PFOS were released into the environment and contaminated drinking water supplies, especially near manufacturing sites. The presence of these chemicals in drinking water may result in health issues including developmental effects, cancer, liver damage, immune disorders and thyroid imbalance.

Radon is a colorless, odorless, tasteless gas that exists due to the radioactive decay of uranium, a common element in our bedrock that can cause cancer. Radon gas dissolves into groundwater and then is released into the air when a faucet is turned on in your home or office.

*Contaminants may not be in your water.

Hard water results from high levels of calcium and magnesium in water. It’s a natural occurrence that affects over 85% of the water supply in North America. Hard water minerals stick to everything water touches, and do more than leave an unsightly residue – they can actually harm your home and cost you money! Locate hard water in Des Moines IA, Ankeny IA, and West Des Moines IA and the surrounding areas using the map below. 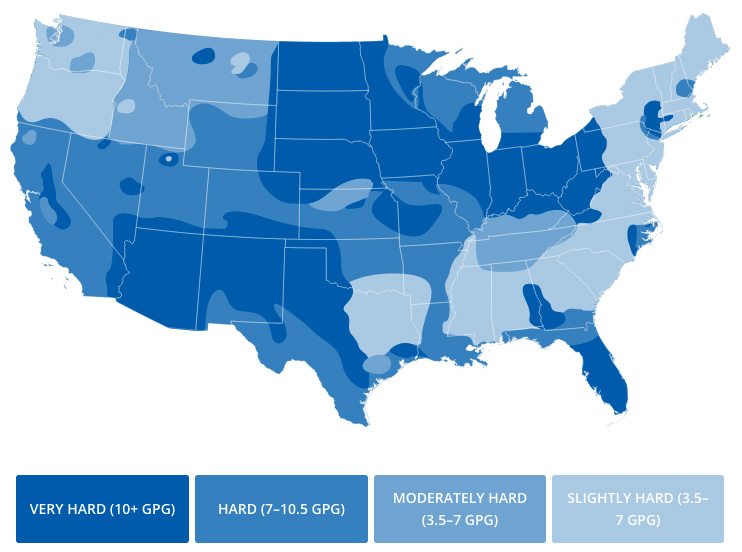 The map illustrates the approximate grains per gallon (GPG). Your water hardness may vary depending on the source. Contact your local Culligan Water Specialist if you’d like to get your water tested.

Hard water can harm your home or business in a variety of ways, and Culligan has the right water treatment equipment for every situation.  Whether you need the innovative Culligan® High-Efficiency (HE) Water Softener to save up to 46% on salt, water and energy use or the affordable Culligan® Medallist Water Softener for everyday softening, your local Culligan Man™ has the perfect solution for you.

Improve the smell of your water with Culligan.

Before your water enters your home, it can pick up smelly contaminants – from the soil around private wells, miles of underground utility pipes or even the local municipal water source itself. Many municipalities add chlorine to offset the problems caused by these contaminants, but this only makes you water smell worse! You may not be able to see these contaminants, but as soon as you turn on the tap or lift a glass to your face, something is obviously not right.

Bad smelling water has many causes, and Culligan has the right water treatment equipment for every situation. Whether you need a Culligan® Reverse Osmosis Drinking Water System that removes particulates smaller than a micron, a Culligan® Whole House System that provides filtered water at every tap or a Culligan® Sulfur-Cleer™ Filter that removes “rotten-egg” odors, your local Culligan Man™ has the perfect solution for you.

Improve the taste of your water with Culligan.

Before your water enters your home, it can pick up bad tasting contaminants – from private wells, miles of underground utility pipes or even the local municipal water source itself. Many municipalities add chlorine to offset the problems caused by these contaminants, but this only makes your water taste worse! You may not be able to see these contaminants, but when you taste the water, something is obviously not right.
Culligan Water – Bad Tasting

Common water taste problems include – A sour, salty, bitter or metallic taste can be a sign of high levels of total dissolved solids (TDS) in your water, normally chlorides, sulfates and bicarbonates. Signs of TDS water problems include:

Whether you need a Culligan® Reverse Osmosis Drinking Water System that removes particulates smaller than a micron, or a Culligan® Carbon Filter that removes the taste of chlorine, your local Culligan Man™ has the perfect solution for you.

Iron enters the water supply from a variety sources – the soil around private wells, corrosion in the pipes themselves and organically occurring reactions with elements in the water. These iron problems exist in many different forms, and knowing what kind of problem you have is essential to properly treating it. If your water comes out of the faucet clear, but turns red or brown after standing, you have “ferrous” iron, also known as “clear-water” iron. If your water is red or yellow when first drawn, you have “ferric” iron, also known as “red- water” iron. Organic iron is usually yellow or brown, but may be colorless.

Whether you need a Culligan® Iron-Cleer™ Filter that provides filtered water at every tap or a Culligan® High-Efficiency (HE) Softener-Cleer to soften and filter at the same time, your local Culligan Man™ has the perfect solution for you.

Acidic water has a pH of less than 7, and usually comes from acid mine water or acidic industrial wastes that has seeped into the water supply. Acidic water not only tastes bad, but it can cause major damage to your plumbing and appliances by eroding any copper it touches.
Culligan Water – Acid Water

Acid problems can affect your home or business in a variety of ways, and Culligan has the right water treatment equipment for every situation. Whether you need a Culligan® Reverse Osmosis Drinking Water System that removes particulates smaller than a micron, or a Culligan® Neutralizing Filter to tackle acid water and stop copper erosion, your local Culligan Man™ has the perfect solution for you.